Local Ballots will have Transparency Question this November - MassLandlords.net

Blog » Local Ballots will have Transparency Question this November

A question on several Massachusetts districts’ ballots this November will deal with government transparency at the state level. When voters select their presidential and representative candidates of choice, they will also be asked to vote for or against an initiative that would support making the results of all votes in state Legislative committees publicly available online. 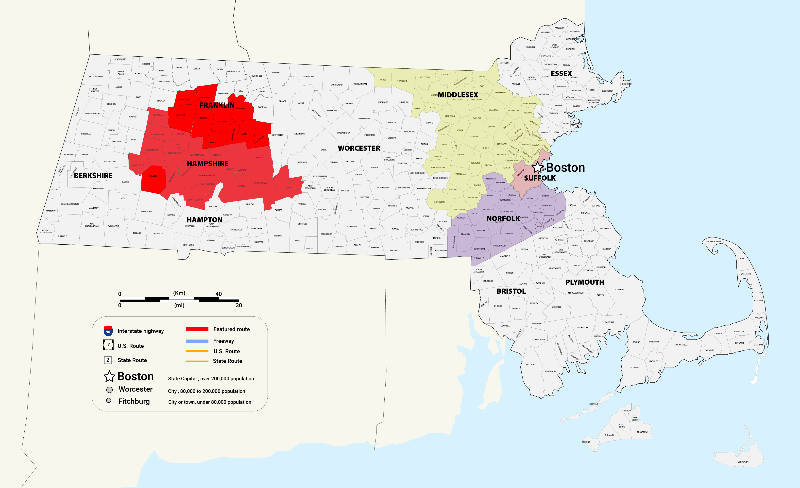 The highlighted areas will have a question on their November ballots asking voters whether they support the idea of greater transparency in the Legislature.
Image credit: CC BY-SA 4.0 MassLandlords, Inc.

The question reads: “Shall the representative for this district be instructed to vote in favor of changes to the Legislative’s rules that would make the results of all the votes in the Legislative committees publicly available on the Legislature’s website?”

In other words, the people will be voting to tell their district representative whether to vote for or against this measure. If such a measure were passed, the results of all votes in Legislative committees would be publicly available on the Internet, including roll call votes, where representatives’ positions on a given matter would be made clear.

This sort of initiative is a kind of non-binding resolution. That is, the districts can tell their representatives how they’d like them to vote, but nothing can compel the Legislature to change its rules (or even vote on changing them). Even so, asking the question sheds light on the issue of transparency in a state where finding out how representatives and senators voted on a given issue may be easier said than done.

The importance of transparency at the legislative level

“Committee votes matter; they dictate or influence the outcome of pending legislation, and frequently the committee vote is the only vote that will happen on a particular bill,” Senator Becca Rausch wrote in a letter published by Commonwealth Magazine in March. She noted that Senate-only committees already publish their votes online.

“We have had serious concerns with transparency at the state house,” MassLandlords’ Executive Director Douglas Quattrochi said, “including most recently the selection of speakers at the public hearing in January.” Quattrochi was referring to the Jan. 14 hearing on rent control, which had landlords waiting for up to six hours to speak on the issue despite having been among the first in the room

Can Too Much Transparency be Harmful?

Some representatives, however, seem cautious about publishing the results of all votes online, or making all votes roll-call votes. In an online forum on Aug. 13, Senator Patricia Jehlen confirmed her commitment to transparency, but expressed some concerns.

“I agree that it would be good if there was more opportunity for people to know,” Sen. Jehlen said in response to a question about transparency. “Because of the pandemic, we [her committees] started having all our hearings online, so you can not only see them then, but you can see them later. All our votes are public. Those are important things.”

However, she cautioned, tying people to their votes too early by means of roll-call voting may hurt some causes, especially if the bill is not likely to pass right away.

“Don’t make people take a vote, so that they are on record, making the wrong vote. You want to keep building support and take a vote when you can win.”

Sen. Jehlen then apologized for her comment, calling it “very inside.”

She may have a point. Representatives may be unlikely to support left- or right-of-center initiatives if they feel as though the initial bill won’t pass. Perhaps that’s the point of the reform. Transparency is something that Massachusetts could use more of when it comes to voting on the regulations that will govern its residents. MassLandlords supports the questions appearing on some district ballots this November and hopes more communities will follow suit in supporting their representatives on this initiative.