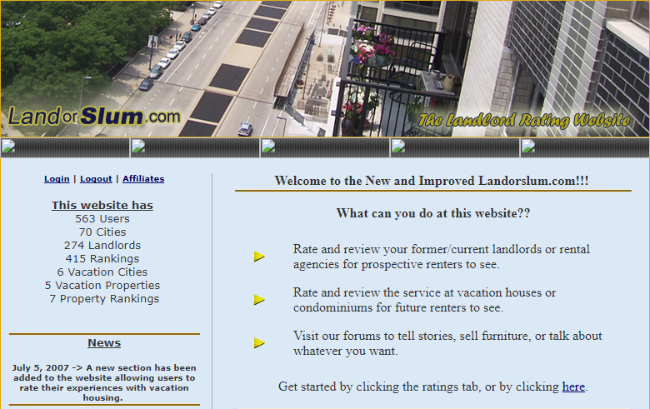 Last updated August 2017. We will add each landlord review site to our list of landlord ratings sites as we become aware of them.

Landlord ratings represent both a business risk and an opportunity for owners and managers. A good rating or landlord review can help your apartments stand out in a crowded marketplace. A bad rating can reduce your application rate and drive down your rents without your even knowing.

How Landlord Ratings can be Skewed

Review sites proliferate because bad owners are out there. Bad owners inspire both the creators of the website and the negative reviewers who flock to post their comments.

Although many landlord ratings sites use a multi-point scale, all reviews could be reduced to just “liked” or “didn’t like.” Potential renters can get a good picture of your business just by reading the highest and lowest rated comment.

When comments carry specific details, they are credible. For instance, a one-star rating could say that the owner called after ten o’clock at night for a non-emergency, took 47 days to repair the heat, and unlawfully withheld a security deposit for normal wear and tear. These specifics speak volumes about the business.

On the other hand, a one-star rating that says the owner is a slumlord, but says nothing else, is not very credible. The tenant may have posted that potentially libelous review out of misdirected anger over the loss of their job and the owner’s having evicted them. Low ratings should be read with a grain of salt. A detailed five-star review should outweigh a vague one-star review.

Here are two landlord ratings from reviewers of Ink Block Apartments in Boston on WhoseYourLandlord.com:
“Looks good from the outside but really doesn't hold it's water inside. Just my two cents!”

Was this renter expecting an aquarium? Lack of specifics leaves the review mostly irrelevant.

This renter gave the landlord a 2 out of 5 but didn’t indicate whether the rent was high for the area, high for the quality of the apartment, or just high because rents in Boston are high.
Here is a review from the same site of Gardencrest in Waltham, at which a murder evidently took place.

“Someone was killed here during a drug transaction. Not a safe environment for raising children.”

The tenant didn’t say what the landlord’s response was. The landlord might be doing a stellar job under challenging circumstances. They might have made changes that will make this apartment safer than anywhere else in this neighborhood, where owners haven’t yet had the experience that this one did.

The idea of rating landlords is not new. Many independent and regional attempts have been made. Not all have survived, probably because of lack of monetization and positivity. In the list below, dates have been approximated using the Internet Archive Wayback Machine.

Landlord ratings sites that endure will probably provide value beyond just an emotional outlet for reviewers. In alphabetical order:

Check Each Landlord Review Site for Your Name

Take control of your reputation and look up your business on each review site. It only takes one rogue complainer to ruin your online reputation. Remember that happy tenants don’t think to give reviews, but angry tenants will put a great deal of energy into hurting your reputation.

If you find that you have a bad online reputation, you have two options.

First, ask your outgoing tenants for good reviews. If they don’t agree, offer increasingly good rewards, like a Dunkin Donuts gift card, or a restaurant gift card in a higher amount, until they say yes. Ask for a five-star review and hand them the card once you have seen the review online. Over time, your five-star reviews will grow to swamp your bad reviews.

Second, you might be able to sue for libel. Just because it’s online, the realm of trolls and anonymity, doesn’t mean a poster is protected from lying. If they have lied about you, you do have legal remedy. For instance, Forbes describes how one tenant wrote that their landlord’s actions had resulted in the deaths of three other tenants. That was not true, and the landlord took their former tenant to court. There are libel attorneys in Massachusetts who can consult with you.

Do You Know About a Landlord Review Site We Missed?

Tell us by emailing info@masslandlords.net

Know which sites are out there and take control of your landlord ratings before you lose business.