Davis v Comerford established a multipart test that all judges must now use to evaluate escrow motions. This case substantially diminished the impact and likelihood of the free rent trick, provided an owner knows to ask for rent escrow.

MassLandlords filed an amicus brief in the case of Allen H. Davis v William Comerford and Gina Comerford. At issue is whether the courts have the authority to escrow rent, and whether the cause of affordable housing will be furthered or set back.

What purpose does a rental business have, if not to collect rent? Can a rental business exist if rent is not collected? Isn't it true that denying rent escrow, where practicable, would be equivalent to denying the rental business' right to exist? And how can the court justify its own high standards for rent escrow when the legislature clearly created a path and a set of fair conditions during which rent may be escrowed?

MassLandlords argues that the legislature clearly intended for rent to be escrowed, that denying a lawful escrow motion amounts to denying the reason for a rental business to exist, and that the standards for injunctive relief must be modified to take this into account.

A recent decision of the Supreme Judicial Court (SJC) helps fix a problem that MassLandlords has been working on for a long time. The name of the case is Davis v. Comerford. You can read the decision online, as well as the MassLandlords amicus brief (docket number SJC12712). We filed an amicus brief because the issue before the court was of vital importance to our members, namely rent escrow. 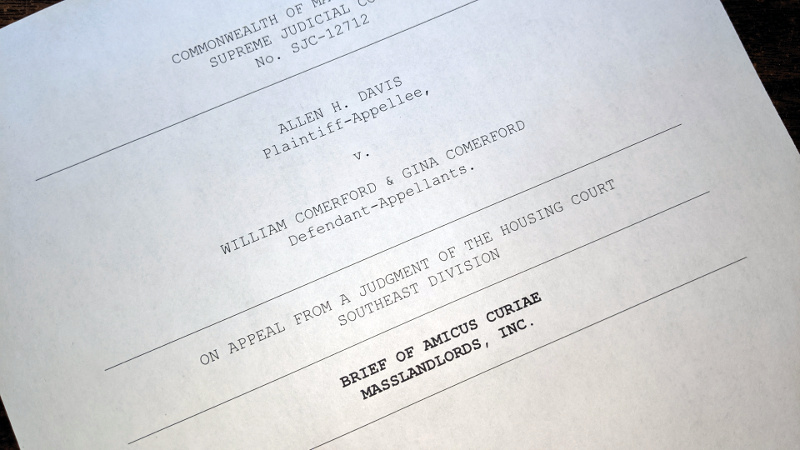 If tenants claim that the conditions in their unit fall below sanitary-code standards, they can withhold some or all of the rent. If the landlord takes the renters to court for nonpayment, the conditions of the apartment will be a defense to eviction. This is a needed and just protection against slumlords.

As MassLandlords members know, conditions issues are commonly raised in all evictions, even where conditions are not the root cause of nonpayment. And even if the issue is legitimately conditions, summary process (eviction) cases can take months, during which time the unpaid rent continues to mount. Renters may feel compelled to spend the rent money on other items in the meantime. The law does not require tenants to set the money aside. Judges will hear the evidence at trial, however long it takes to make repairs, and decide a fair split at the end.

For instance, the tenants may have been justified in withholding some rent (say 25%), and they now owe the landlord the balance (the remaining 75%). All too often the money is simply not there.

To forestall this situation, some landlords file motions for use and occupancy that ask the judge to order the tenants to set the rent money in an escrow account.

Motions for Use and Occupancy Payments

In their motions for use and occupancy payments, landlords point to the statute that gives the judge authority to issue such orders, General Laws chapter 239, section 8A.

In Davis v. Comerford, the SJC referred to this law as “less than a model of clarity.” As a result of the confusing language in the statute, although some Housing Court judges do issue use-and-occupancy orders, others do not. Of those who do, many use the stringent three-part test that courts use when considering motions for preliminary injunctions, which the SJC announced in Packaging Industries Grp., Inc. v. Cheney, 380 Mass. 609 (1980).

Under that test, landlords have to show that without the court order they will suffer “irreparable harm,” a term that usually means harm that money cannot fix. But where the harm is something that money can fix, it is usually not “irreparable.”

There is a narrow exception: If landlords are able to prove that the ongoing lack of rent in this particular case will put them out of business, they might prevail. But few landlords are able to meet that threshold. After all, when the rent-withholding tenants pose an existential threat to the business, landlords tend to make the economically rational decision to do a cash-for-keys deal, paying off the tenants so as to regain possession.

For decades, MassLandlords and other advocates have been filing bills in the Massachusetts Legislature that would require tenants to set aside the withheld money by depositing it in an escrow account. These rent-escrow bills have never even made it out of committee, let alone been put to a vote on the floor of the House or Senate. For an account of the efforts, check out the Massachusetts Real Estate Blog article by Attorney Richard Vetstein.

At committee hearings, the tenants’ advocates usually say that rent escrow is both (1) unfair to tenants, ad (2) already available. As articles in previous editions of this newsletter have explained, the tenants’ advocates such as the Harvard Legal Aid Bureau and Massachusetts Law Reform Institute are well funded, well organized, and well received in the Legislature. Their proposals gain traction early.

In contrast, our bills are, in State House parlance, DOA (dead on arrival). Members who came along to the hearings at the Joint Committee on Housing earlier this year can attest to the lack of warmth with which landlords’ statements are received vis-à-vis those from tenants’ groups.

Then, in March 2019, the Supreme Judicial Court (SJC) invited amicus briefs in Davis v. Comerford. The question was the validity of orders for use and occupancy payments, i.e. rent escrow.

It was hardly a shock that the Harvard Legal Aid Bureau would file an amicus brief. What did come as a surprise was the organization’s moderated tone with respect to the renter’s attorney. While the renter’s attorney was arguing that all rent escrow orders were unlawful, Harvard Legal Aid Bureau wrote that a judge’s authority to order use and occupancy is lawful beyond doubt. Why?

The Harvard Legal Aid Bureau writers stipulated that the three-part Cheney test was the standard that judges should apply in deciding whether to grant a landlord’s motion, an impossible bar in most scenarios. The effect was the same as a ban, but the moderated position may have been necessary to maintain credible opposition to our mandatory rent escrow bill currently before the legislature. If they argued all rent escrow motions were unlawful, and if the court agreed, the need for our bill would become pressing and obvious.

The brief I wrote for MassLandlords argued against the three-part test. We wrote that if the SJC opted for the irreparable-harm test, then it should create a rebuttable presumption that loss of rent automatically jeopardizes a landlord’s business and, therefore, constitutes irreparable harm.

The decision in Davis v. Comerford did not establish a rebuttable presumption of irreparable harm. Instead, it announced something better.

First, the SJC made absolutely clear that judges have the statutory and equitable authority to issue use-and-occupancy orders requiring tenants to pay withheld rent into escrow. Although some doubted this before, this issue is now beyond doubt in Massachusetts.

Second, the court went even further: “We further conclude that, under its equitable authority, a judge may order use and occupancy payments into private escrow accounts, and, in certain limited circumstances, directly to the landlord.”

Then the SJC provided a non-exhaustive list of factors that judges should consider in deciding motions for use and occupancy, including:

But the very first factor that the SJC announced was this: “[T]ime lost in regaining [real property] from a party in illegal possession can represent an irreplaceable loss to the owner.” The presence of this factor represents a very significant win for landlords as does its place at the top of the list.

For the first time since we have been working on rent escrow, there is finally a recognition that a property taken out of service by an unpaying, never-to-pay renter is an irreplaceable loss of time and our lives as landlords.

It is important to say that this decision does not close the free rent trick loophole, which remains large in the statute. If a renter purposefully damages their apartment, it is still within the authority of a judge to perpetuate the free rent trick, wittingly or not, by ordering escrow of less than full market rent. This reduces the “free rent trick” to the “reduced rent coupon.” It is equally wrong and potentially as damaging.

Whether and how judges will in practice use their discretion to clamp down on the free rent trick remains to be seen. Suffice it to say, legislation filed by MassLandlords would further curtail the free rent trick. Our bill would also keep the law consistent with this new court decision, which gives judges clear guidance on escrow hearings. This decision does not invalidate the need for increased legislative clarity.

Landlords across Massachusetts now have a lifeline against protracted nonpayment cases. Davis v Comerford establishes clearly that rent escrow is lawful, that judges cannot summarily refuse to issue rent escrow requests, and that a hearing on the matter shall take place in the fair manner outlined.

This amicus brief was made possible by our Property Rights Supporters.