Blog » HUD Wants to Hear from You on Section 8, Fair Housing

In August, Ben Carson, Secretary for the Department of Housing and Urban Development (HUD), announced two measures of interest to landlords: first, a new Landlord Task Force to address concerns about the Housing Choice Voucher Program, also known as Section 8; and second, a proposal to amend its regulations about Affirmatively Furthering Fair Housing (AFFH). 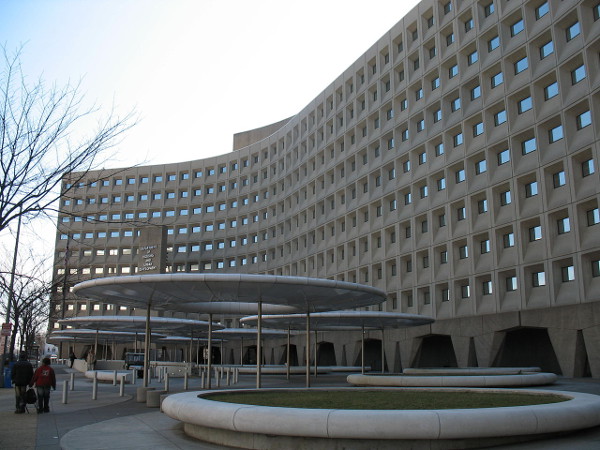 Headquarters of the Department of Housing and Urban Development. CC-SA Marcel Breuer.

The new Landlord Task Force will solicit comments about reluctance to participate in the Housing Choice Voucher (HCV) program.

The HUD press release describes the reason for the outreach effort: “[T]wo new studies find most landlords do not accept voucher-holders, and those who do complain about the program’s administrative requirements and housing authorities which manage the program at the local level.”

Massachusetts state law prohibits discrimination against applicants on the basis of their receipt of public assistance, e.g. Section 8 vouchers, so landlords in the Commonwealth have no choice in the matter. Refusing a Section 8 applicant will lead to heavy fines, and tenant advocacy groups such as the publicly-funded Massachusetts Fair Housing Center send out actors to test for compliance.

Some housing authorities are better than others at administering the Section 8 program, and voucher-holders do have the right to transfer a voucher from one authority to another (known as “portability”). But the choice is the tenant’s, not the landlord’s, and it only comes into play when the tenant wishes to relocate.
This means that landlords have little in the way of leverage when it comes to pushing housing authorities to address complaints. And there is no shortage of complaints.

Sandra Katz, owner of Quality Property Management Services in Worcester, gave two causes for concern about the way Section 8 is administered. First, the lack of accountability for tenants who damage the rental property. “There are no consequences,” said Katz, who says that housing authorities do not hold voucher-holders responsible. Even after a Section 8 inspector makes note of the fact that a conditions defect is “caused by tenant,” there is no follow through.

When the security deposit does not cover the costs of repairs, the only recourse is litigation. The shortcoming, if a landlord goes to court and wins judgment against the tenants? “They’re judgment-proof,” says Katz, meaning the tenants have no assets or regular income for the landlord to attach in order to enforce the judgment.

The second problem Katz raises is the situation that unfolds when Section 8 voucher-holders stop paying their share of the rent. The landlord has to serve the authority as well as the tenant with the 14-day notice to quit. The authority then has the right to terminate the voucher. But the process, replete with pre-termination conferences and hearings, takes a long time. “You grow old waiting,” says Katz.

In addition to reaching out to landlords about Section 8, HUD is seeking comment on the proposal to amend its regulations on Affirmatively Furthering Fair Housing (AFFH).

Before becoming HUD Secretary, Ben Carson criticized the Obama administration’s use of “disparate impact” theory to hold up new housing developments and its policy of conditioning federal aid on cities and towns providing HUD with data about the extent of racial segregation. In a 2015 op-ed, Carson claimed that “these government-engineered attempts to legislate racial equality create consequences that often make matters worse.”

As HUD secretary, Carson phased out that Obama-era AFFH rule.

In August, HUD published its advance notice of proposed rulemaking.
Explaining the need for amendments, HUD’s advance notice claims that “the current regulations are ineffective in addressing the lack of adequate housing supply, which has particular adverse impact on protected classes under the Fair Housing Act.” On the theory that increasing the overall supply of affordable housing will be good for all would-be renters and buyers regardless of their membership of a protected class, Carson is trying to encourage the construction of affordable homes. To that end, he wants local governments to allow greater density.

According to the Wall Street Journal (August 13, 2018) Carson cited Los Angeles as an example of how zoning rules hamper housing development by confining most of the buildable land to single-family home development. “Of course you’re going to have skyrocketing prices that no one can afford,” the Journal quotes Carson as saying.

Zoning is not a federal issue so HUD has no authority to force state and local governments to comply. But it can use federal funding as an incentive for “people who really would like to get a nice juicy government grant,” as Carson put it.

The advance notice invites comments from the public on how to increase the housing supply and make better use of HUD’s resources. It offers eight guiding questions, including this one:

“Are there any other revisions to the current AFFH regulations that could help further the policies of the Fair Housing Act, add clarity, reduce uncertainty, decrease regulatory burden, or otherwise assist program participants in meeting their AFFH obligations?”

To submit comments electronically, readers can use the Federal eRulemaking Portal: http://www.regulations.gov.HUD. See also the short notice in this edition, “Your Message to HUD.”

2 Responses to HUD Wants to Hear from You on Section 8, Fair Housing