Blog » How to Get a Bat out of an Apartment 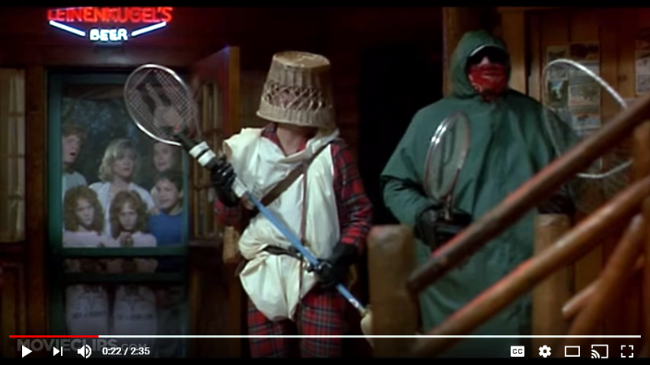 In the movie "The Great Outdoors," a clip of which is available on YouTube, Dan Aykroyd and John Candy demonstrate hilariously bad bat removal technique. http://9nl.org/ext-youtube-great-outdoors-bat

A DIY article for landlords wanting to know how to get a bat out of an apartment. Discusses permanent exclusion as well.

Of all the vermin, bats can be the most terrifying. They can also be the most difficult and costly. In this article, we’ll cover bat basics, tips and tricks, long-term exclusion principles, and conservation for landlords.

Bats are a Customer Service Nightmare

Imagine the typical bat encounter. The tenant has just slipped into their pajamas and fuzzy slippers to watch a little Netflix with some hot cocoa. The lights are dim. The house is quiet.

Then all of a sudden, whoosh! a rat with wings and sharp teeth appears out of nowhere and dive-bombs the tenant’s head. They scream and throw up their arms. Hot cocoa flies everywhere. Burnt and terrified, they grab their cell phone and their cat, run into their bedroom, and slam the door, where they collapse in a heap and frantically call you, as lord of the land, to deliver them from evil.

Neither cockroaches, mice, rats, nor bedbugs are capable of such visceral terror. Nothing else comes at our heads with its mouth open and teeth flashing when we’re least prepared to deal with it.

Of course the truth is, when it starts flying in your living room, a bat is just as scared as you. And its mouth is only open for echolocation, not biting. “Ee! Ee! How the heck did I get here? Ee! Ee! Where’s my exit? Who is screaming? Ee!”

Landlords hate bats because like plumbing emergencies, bats are an unscheduled interruption to the normal late-night routine of counting money and plotting rent increases.

So neither tenants, landlords, nor bats like bat encounters in apartments. What can be done?

Bats are Two Kinds of Dangerous, but not like you Think

Bats carry a variety of diseases. They also have protected status. Tampering with a bat can leave you either in the hospital or in jail.

The first bat disease is the well-known rabies virus, which affects bats like all mammals. The rabies virus may be the inspiration for the “zombie:” rabies makes an animal drool, bite, and attack others. A bat with rabies who bites a person or a pet may transmit the disease, requiring you or your pet to get a rabies shot. Rabies shots are effective before the onset of symptoms, but after that, the disease is fatal.

The second bat disease is the lesser-known bat mite. Bats carry mites, which proliferate on dead bat bodies as well as living bats. These mites can transfer to people and cause itchy colonies requiring medical attention, like scabies. They are like a poison ivy rash that grows over time and can jump person-to-person.

The third bat disease is the bat bug. Like bedbugs, bat bugs infest your sleeping area and cause red bites. Eliminating bat bugs requires all the effort it takes to eliminate bedbugs.
Outside Massachusetts, bats are also a vector for Ebola, histoplasmosis, encephalitis, Marburg hemorrhagic fever, and other serious diseases.

Never thwack a bat with a tennis racket. This will aerosolize its saliva and blood, and whatever disease it is carrying, you will inhale. Treat each bat like it is contagious, because it may well be.

For the last ten years, the National Wildlife Health Center has been tracking a highly fatal disease called “White-Nose Syndrome.” A fungus has killed 80% of certain species of brown bats nationwide. The outbreak was discovered in New York.

In Massachusetts, 99% of certain species are now dead. There are six bat species that are protected.

Bats eat enormous quantities of nuisance insects. Inside the 128 beltway, one bat species alone cleans out 15 tons of mosquitoes each summer. They also eat agricultural pests. Bats are therefore an essential part of outdoor enjoyment and successful agriculture.

Jail time of up to 180 days may be ordered for any person who kills an endangered bat. You would have to become a trained naturalist before you could identify a non-endangered, killable bat from an endangered one. For this reason, we recommend you treat all bats as protected. Never kill any bat.

Here is the easy procedure to get a bat out of an apartment.
First, we’ll say it again: never thwack a bat with a tennis racket. We explained why above under “diseases.”

Get dressed. The most complete protection may seem overkill, but you can decide for yourself: baseball hat or other non-knitted head covering, chemical goggles, respirator, long sleeves, latex gloves, and garden gloves over the latex. This protects you from accidental hair entanglement, aerosolized saliva, and rabid bites. Once armored, enter the room containing the bat.

If the bat is still flying, open a window and the screen behind it. Close all the doors. If it is night, stay in the room and sit on the floor. The bat will fly in circles until it echolocates the open window, at which point it will fly out. This may take around five minutes. If it is day, seal off the room, including under the doors, and return one hour after nightfall. That bat should already be gone. Look around with a flashlight.

If the bat is not flying, try to locate where it has landed. Note that bats cannot hop up and take flight like a bird. They can only drop and fly. If they land, they will have to climb up somewhere before they can fly. Bats like to land on curtains and wood moulding, which are easily scaled. When checking a curtain, move it slowly away from the wall to check all wrinkles on both sides.

You can use a fine-mesh butterfly net, a jar, or a Tupperware to catch a non-flying bat. Wearing your double-gloves, coax the bat into the net or jar. It will squeal and bare its fangs. It may try to bite you. You will be safe if you wear gloves and keep your fingers away from its mouth. Once you have the bat in the net or jar, cover the opening with something other than your hand. Take the assembly outside to the base of a tree, and leave it there, opened. Once you have gone, the bat will climb up the tree and escape. You can collect the assembly in the morning. (Note that if you used a frog net instead of a butterfly net, the bat will be tangled and you will have to cut the net carefully with scissors to free it.)

This is how to get a bat out of an apartment.

DIY removal is only a band-aid. If you have a bat, it got into your house somehow. This ought to be preventable. You should call a professional to have the bat excluded from returning. This is different from extermination. Exclusion prevents the animal or its friends from returning. Extermination kills the animal, which as we discussed above, would be illegal for bats. Sometimes exterminators also do exclusion work.

Bats, like mice, can navigate tiny holes to enter. They like to sleep together in colonies, and can easily fill an attic with their family.

Professional exclusion is dangerous, difficult, and expensive compared to other simple pest jobs, like cockroaches. A professional will spend a day or two on a ladder sealing all the holes around your building, especially at the roof, chimney, siding, dormers, and drip edges.

Once all but the last hole is sealed, the professional will install a one-way door over that last hole. This allows the colony to drain out when they go hunting but will prevent them from returning. A bat job might cost several thousand dollars, but will be money well spent. A good company will guarantee their work. You will avoid late-night customer service nightmares for years.

Once you understand that the bat is just as scared as you, vulnerable to a host of its own diseases, and all it wants to do is fly out an open window, you’re ready to appreciate bats. They are amazingly social, the only mammal that truly flies, and a huge benefit to mosquito and pest control.

Some owners install bat houses to encourage colonies on their property outside of their attic. If the bats are in a bat house, they aren’t in your building! You can learn how to build your own bat house on pages 16 - 17 of the MA Homeowners Guide to Bats.

So that’s how landlords can remove bats from an apartment and keep them out. May the bat signal never terrify you!