Earlier this year, Salem mayor Kimberley Driscoll proposed amendments to the city’s strict requirements around accessory dwelling units (ADUs). This is a timely subject; Governor Baker’s most recent Housing Choice Initiative would affect restrictions on ADUs throughout the state. 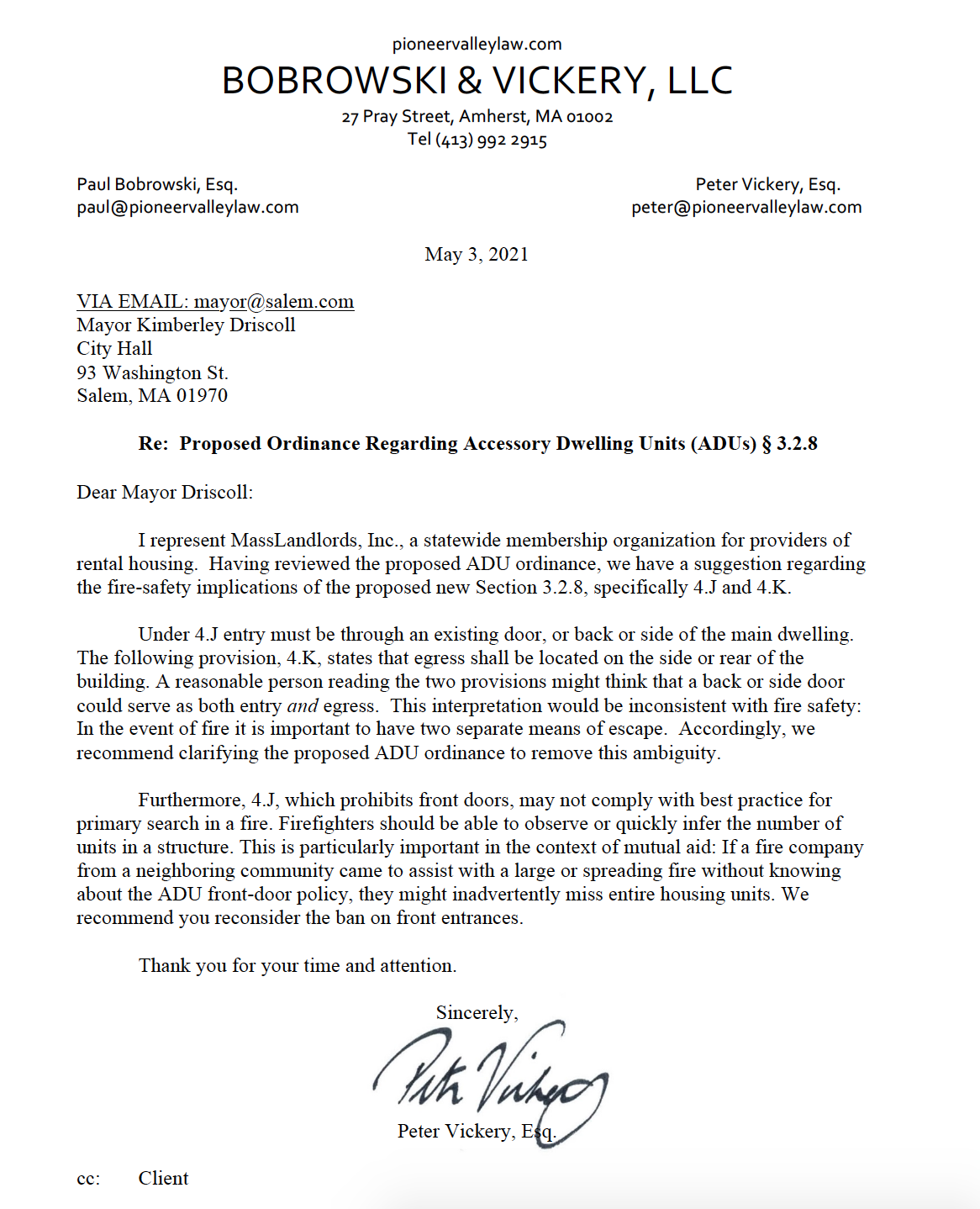 The letter sent on behalf of MassLandlords to Salem mayor Kimberley Driscoll in May 2021
Image license: CC-by SA-4 MassLandlords

“The...ordinance would allow for the creation of additional affordable housing units in Salem,” Mayor Driscoll wrote in a February 2021 letter to the city council that accompanied her proposal.

However, in reading Mayor Driscoll’s proposal, we at MassLandlords were concerned about the language surrounding paths of egress. This May, we sent her a letter lauding her efforts and suggesting verbiage changes that would make clear that two paths of egress are needed in ADUs.

“Having reviewed the proposed ADU ordinance, we have a suggestion regarding the fire-safety implications of the proposed new Section 3.2.8, specifically 4.J and 4.K,” wrote Peter Vickery, Legislative Affairs Counsel for MassLandlords.

“Under 4.J entry must be through an existing door, or back or side of the main dwelling. The following provision, 4.K, states that egress shall be located on the side or rear of the building. A reasonable person reading the two provisions might think that a back or side door could serve as both entry and egress. This interpretation would be inconsistent with fire safety: In the event of fire it is important to have two separate means of escape,” the letter continued.

The letter further suggested reconsidering a part of the ordinance that would not allow for additional front doors to be placed on a house with an ADU. Front doors can help firefighters know how many units are in the house in the event of an emergency.

The city of Salem responded that they had realized the issue with the ordinance’s wording ahead of receiving our letter and had already corrected the verbiage prior to voting on it.

The full letter from Vickery appears in the images accompanying this article.