Requesting proof of income is a standard step in the tenant screening process, and with good reason. Landlords need to feel confident that their renters will be able to pay the rent on time for the duration of their lease. 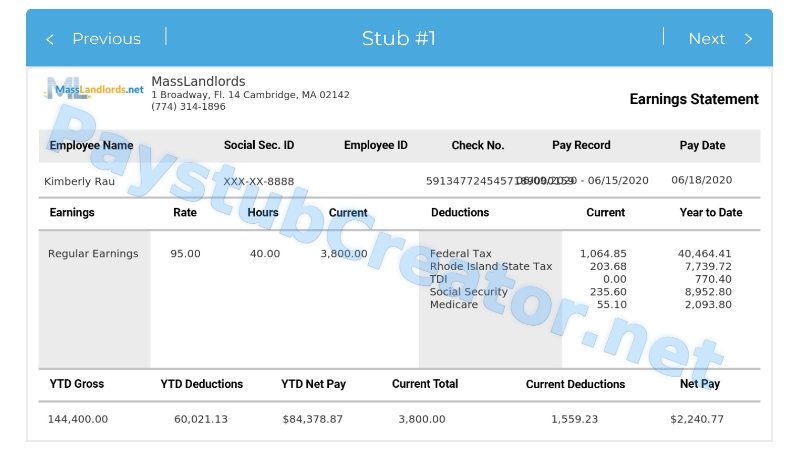 Not a bad salary for a freelance writer! But it’s entirely made up, and for $8, could be on its way to convincing a landlord that this writer could easily afford that luxury apartment.

However, creating a fake pay stub is a relatively simple task with the use of at-home editing software or unscrupulous Internet vendors. A fake pay stub can be used to falsely verify take-home pay and pass that vital qualifying step.

In this article, we’ll discuss the methods of obtaining or creating these falsified documents, as well some of the ways you can spot a fake pay stub.

Why Fake a Pay Stub?

Most landlords want to see that their tenants have a certain rent-to-income ratio (unless they receive subsidized housing vouchers). In some places, like New York City, landlords may require a gross annual income of 40 times the monthly rent. Massachusetts housing providers typically expect tenants to demonstrate a monthly gross income reflecting three times the rent. And while the average rent in Boston is lower than in Manhattan ($3,432 compared to $4,208, respectively), no matter how you do the math, those are still not small numbers.

How to Buy a Fake Pay Stub

A quick Internet search will turn up a plethora of websites eager to help you create a pay stub that says whatever you need it to. Some sites go far to suggest authenticity, with names like Real Check Stubs, but you can enter whatever information you’d like and no one verifies it. For $8.99 you’ll receive a printable file within minutes that includes “a background similar to the background found on paycheck stub stock.” Paystubs.net will do all that and more: Their site also offers a way to help users generate a W2.

It should be asked: why would someone need to use sites like these if all they need is a copy of their actual pay stub? In Massachusetts, employers are required to provide pay stubs to their employees, and getting a second copy should be as simple as contacting one’s human resources or accounting department. There is one exception, which we will touch on now.

It may seem impossible for pay stub generation sites to be legal. However, Paystubcreator, yet another pay stub generation site, explains that they exist to help self-employed individuals and freelancers (who often don’t have traditional pay stubs) verify their income for things like rental applications. If an individual inputs accurate numbers, then there should be nothing wrong with that. However, none of the sites seem to have any way to verify that the information someone inputs matches anything. That leaves things open to abuse by dishonest folks. (In fairness to  Paystubcreator, they seem at least somewhat concerned about preventing fraud, and offer their own tips about how to spot fake pay stubs.)

Ways Fake Pay Stubs may be Created at Home

If $9 is too much to pay for a fake pay stub, would-be renters who are even slightly tech-savvy have another option. With an easily downloaded pay check template (and the Internet is rife with them), a program such as Photoshop and some graphic design talent, it’s easy to create a pay stub out of thin air, or alter an existing pay stub to match any income requirements.

How to Spot a Fake Pay Stub

Fortunately, there are a few ways to spot a fake pay stub. The first rule of thumb: Always check employment references, and make sure you ask your prospective tenant about contacting their current employer. If the tenant refuses, that’s a red flag that something may be amiss. If their pay stub lists a company your potential renter says you aren’t allowed to contact, there’s a good chance it’s because the employer has never heard of that person.

But, as discussed earlier, it’s easy to create a pay stub with an authentic employer, but with altered numbers. What can a landlord do about that? Many employers make it a policy not to verify income. But all is not lost.

One way to tell if an image has been stolen off the Internet and digitally altered (for example, if a potential tenant steals an image of a paystub and uses a program like Photoshop to edit in their own information) is to look at the exif data on the image. You can use sites such as exifinfo.org to upload images and have the data analyzed. This metadata should tell you where the document originated from and if (and when) it has been altered. If the document shows suspect origins or heavy editing, that may be a red flag. The site fotoforensics offers tutorials on fraud detection and interesting challenges to check your skills in spotting fakes.

But editing a document is often a lot more work than simply purchasing a fake paystub and waiting a couple of minutes for a digital file. Your first step should be to look at the information presented on the paystub. Do the math on the gross income and reported withholdings for state and federal taxes. Do the numbers match up? Or are they wildly off the mark? Even though tax withholdings are easily researched on the Internet, not everyone is going to do the work to figure out what those figures should be. There are also standard formulas for withholding federal Medicare and Medicaid from gross income, which can be verified online.

Also, pay attention to the dollar amount. Thanks to taxes, net pay is rarely a neat, even number. If you’re seeing paystubs that report weekly payments of an even $1,000, for example, you may have reason to be suspicious.

Other Ways to Verify Income and Pay Stub Accuracy

If you are suspicious about the paystub information your prospective tenant presents, your next avenue is through the bank itself. In Massachusetts, it’s completely legal to ask to see banking information in order to verify direct deposits or paycheck deposits. If prospective renters won’t let you see that reported income hitting their bank account, that’s another red flag (though they may offer tax returns in lieu of this, which may be a viable alternative).

Last year we wrote an extensive article about verifying income for prospective tenants. It’s worth the time to read through. Essentially, bank statements and tax statements are your best bets for income verification if you doubt the authenticity of the paystubs you are being offered. In some cases, an offer letter from an employer may also be sufficient proof of employment (particularly if the prospective renter is new to the area and starting their job shortly). If you are considering renting to someone who receives some form of government subsidy (remember, you cannot refuse a renter based on this), you can still ask for proof of their income, such as a benefit verification letter from SSDI or SSI.

In the end, you’ll never be able to spot every scam out there. But a little common sense can go a long way toward keeping you, and your rental properties, safe. If it sounds too good to be true, it probably is. Do your due diligence, verify income thoroughly and consult with a lawyer if you are unsure how to proceed.

5 Responses to Fake Pay Stubs: The Easiest Proof of Income You Never Want to See