On Friday, May 1, the MassLandlords Board of Directors voted unanimously to support the surety bond bill as a legislative response to the eviction moratorium. This vote is consistent with membership priorities expressed in the recent moratorium response survey.

The eviction moratorium response survey was launched on Friday April 24. 10% of members responded in the first four hours, an additional 17% responded over the next week, with 485 total responses as of 4:30pm on Thursday April 30. Members were asked to evaluate proposals on a scale from 0 (never do this) to 100 (do this immediately), where 50 was pure indifference. 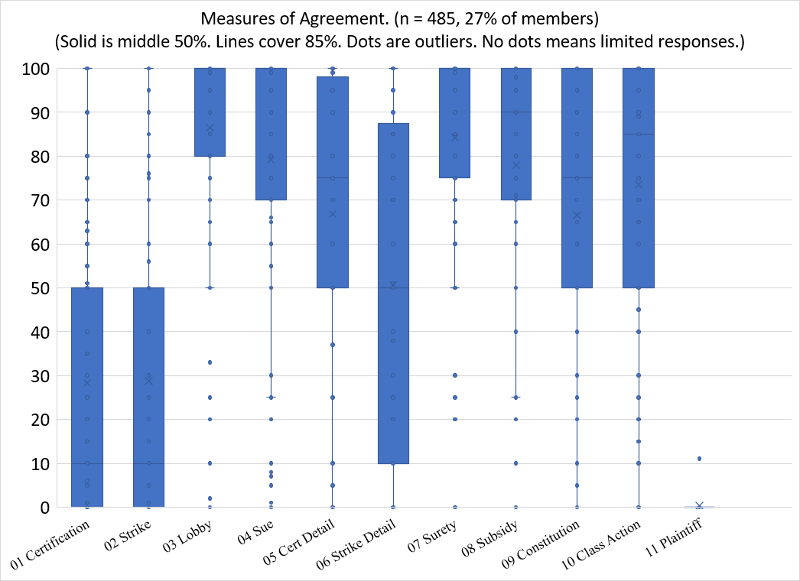 Eviction Moratorium Response Survey results. Score voting shows support for proposals on a scale of “0” (never do this) to “100” (do this immediately), with “50” being pure indifference. CC BY-SA MassLandlords, Inc.

Proposals were suggested in two rounds. The first round had four general proposals. Numbers shown in underline correspond to the graph far below.

Proposals in round one:

Follow-up questions were asked immediately based on the responses to round one:

If the respondent supported certification:

05 Cert Detail: We’re too small to take on this law at this time. By growing and establishing credibility for the association, we will eventually get the resources we need to prevent bad policy in the future.

If the respondent supported a tax strike:

06 Strike Detail: Organize nonviolent collective action now, like a real estate tax strike. Real estate taxes make sense to eliminate because like the eviction moratorium, taxes are under government control. This action will attract attention to springboard to another solution TBD.

If the respondent support lobbying:

07 Surety: Lobby for a law now to enact statewide surety bonds. Housing providers are essential to the success of a stay-at-home order, so the state should guarantee that housing costs are covered. Every landlord should get paid for COVID-19 related losses via surety bonds or insurance backed by the Commonwealth

08 Subsidy: Lobby for a law now to enact additional rental subsidies Housing providers are essential to the success of a stay-at-home order, so the state should just pay for rent. Rental subsidies like Section 8, RAFT, and others can be a logical follow-up to the eviction moratorium, paying fully for the time landlords must provide free housing.

If the respondent supported a lawsuit:
09 Constitution: Litigate now to stop this law on constitutional grounds. This is an unconstitutional taking of private property for a public purpose without compensation. There are other constitutional issues with the eviction moratorium.

10 Class Action: Litigate after the pandemic as a class action. After the public health crisis has passed, we should collect all the evidence of unpaid rent and lost value, add it up, and file a class action lawsuit against the Commonwealth for the costs.

The survey results lend themselves to the following interpretation.

There was little support for doing nothing. Only 19% of members supported certification as a primary goal in response to the eviction moratorium.

There was little support for a tax strike. Only 23% of members support a tax strike, and of those, only about half were willing to go to jail for contempt of court.

There was strong support for a lawsuit. 80% of members supported a lawsuit. Of those, there was roughly equal support of a suit on constitutional grounds vs a class action lawsuit. 0% of members disagreed, and 12% strongly disagreed.

3 Responses to Eviction Moratorium Response: Board Vote for Surety Bond