Foundations poured in eastern Hampden or western Worcester county are cracking. Two owners in Longmeadow (different from the couple pictured)recently made headlines for their plans to jack up their house, scoop out tainted concrete, and repour their foundation, at an estimated cost of $325,000. 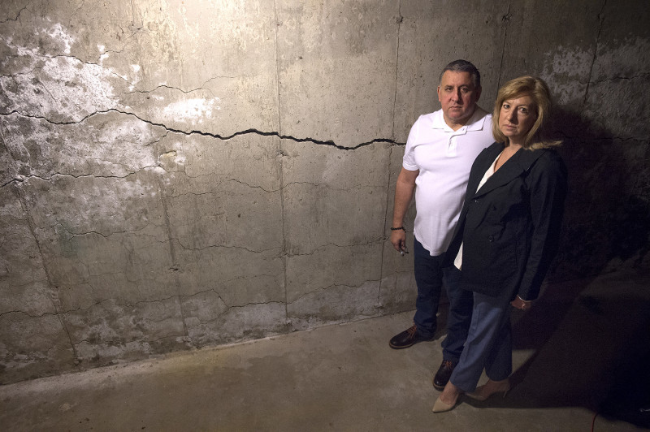 Vincent and Maggie Perracchio, of Willington, CT were interviewed by the Hartford Courant in 2017 beside a wall that was cracked and bowed out 5 to 6 inches. Pyrrhotite was blamed. "Editorial Part 1: Pyrrhotite Plague Is Killing The American Dream."

Some suspect JJ Mottes Quarry in Willington, CT, which manufactured concrete from 1983 to 2017, and whose quarry contains pyrrhotite. Pyrrhotite is an iron sulfide mineral that can expand in contact with oxygen and water. In April 2016, Canadian Prime Minister Justin Trudeau pledged $30 million in aid to Quebecois owners who purchased pyrrhotite foundations.

A JJ Mottes spokesperson stated that pyrrhotite is not itself a problem, but that failure to follow accepted standards for pouring basements (including failing to waterproof or adding extra water to speed pouring) would create the cracking problem.

So far, reportedly 30 Massachusetts homes have been affected. Potentially tens of thousands of homes, mostly in Connecticut, contain the suspected concrete.

Not all homes that have cracked foundations have tested positive for pyrrhotite. Massachusetts legislators has proposed legislation that would appropriate $50,000 to reimburse owners for testing and core samples.
Owners concerned that their building may be unstable should contact a structural engineer for an evaluation.