Not one landlord representative:
Housing Court is praised lavishly, with no hint of reform

A 25-member Commission, appointed by the Massachusetts Supreme Judicial Court (SJC), has drafted a proposal to expand the pro-tenant Housing Court to cover the entire state, replacing more moderate local district courts in the case of landlord-tenant disputes. Presently, almost a third (31%) of the state’s population uses local district courts. The proposal would increase the present five-region Housing Court system by almost 50%.

This presumably neutral Commission – the Massachusetts Access to Justice Commission – has a substantial component of pro-tenant advocacy groups and pro-tenant individuals plus four Housing Court judges, but not one landlord representative. The Commission is hardly a balanced group; it’s obviously pro-tenant.

A legislative aide at the State House said there has been “a lot of discussion” and “a lot of advocacy” in favor or the expansion proposal. When asked about the cost of the expansion, a staff member at the administrative office of the Housing Court said “We don’t know what will happen” and noted that funding for the judiciary is being cut back.

Boston Housing Court, the main court to be expanded, is already overloaded, with three judges handling over 300 cases on Thursdays and with four months delay to get a jury trial. That delay hurts landlords and helps tenants, who often elect to have a jury trial only because it gives them four more months of free rent in addition to other delays.

Despite its name, this Commission seeking “justice” includes leaders of groups that advocate exclusively for tenants, almost never for landlords. Commission members include:

To name six members of the Commission that we could quickly identify. The Housing Court is just one division of the full six-division trial court system in Massachusetts. Six exclusively tenant advocates on a 25-member Commission intended to oversee “equal justice” in the entire Massachusetts court system plainly shows the commission is stacked, stacked against landlords.

Moreover, four members of this 25-member Commission are Housing Court judges including Chief Justice of the Housing Court Department Steven Pierce. In other words, these judges have a personal stake in any Housing Court expansion and have no hesitation to ally themselves openly with a Commission containing many obvious tenant advocates and not one landlord advocate. With landlords and tenants battling each other in their courts every day, where is the judicial ideal to maintain at least the appearance of impartiality?

The Commission’s proposal talks repeatedly about “code enforcement,” “housing conditions,” and “sanitary code violations” as important issues the Housing Court deals with, supposedly promptly and well. Yet Housing Court is where the free rent trick, an eviction-delaying tactic used by non-paying tenants, gets played out and enforced, pitting landlord and tenant against each other in a vicious fight. Housing Court judges facilitate this fight and must know what is going on:

Housing Court judges must know what happens in their courtrooms every day, yet they do nothing about it. Perhaps the state’s no-escrow rent-withholding law ties their hands. But no judge comes forward and says to the Legislature: “We need to change the law. We need an escrow law.” Instead, they close their eyes.

Tenant advocates point out that judges have the option of ordering the withheld rent to be escrowed, as if that voluntary option alone should be satisfactory. And supposedly judges do more escrowing orders now than in the past. But in the vast majority of cases, they do not require escrowing, another sign of their bias against landlords.

Nothing could be fairer than escrowing rent. No one gets the money until repairs are done. That condition keeps the landlord’s feet to the fire. That condition stops the tenant from delaying repairs and running off with unpaid rent.

The height of dishonesty in this proposal is the claim that Housing Court “brings abandoned property back into use” and “stabilizes neighborhoods.” On the contrary, the Housing Court along with the no-escrow rent-withholding law is a major cause of abandoned housing, which is not the picture of a “stabilized neighborhood.”

Back in the late 1990s, SPOA was sought out by five housing inspectors from a major city and three towns in Massachusetts, inspectors who all said that the rent-withholding law was causing abandoned housing in their neighborhoods and hamstringing efforts to improve housing conditions. These inspectors wanted a rent escrow law in Massachusetts – to save the housing.

A common pattern, said these inspectors, is landlords, especially small landlords, who charge low rents to low-income tenants and let many repairs go undone, giving their tenants an opening to play the free rent trick. The landlords get stuck: no income to repair means no way to stop the free rent trick. Banks will not loan to them under these conditions. The landlords are forced to abandon their properties, and valuable low-rent housing is lost.

Then tenant advocates in league with non-profit housing development groups – who all are ideologically opposed to private property – rehab the properties with government funds and replace private housing with government-subsidized housing. No wonder these tenant advocate groups are pushing for more Housing Courts in the state. 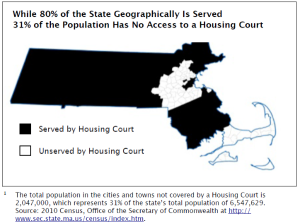 3 Responses to Commission wants to expand Housing Court by 50%