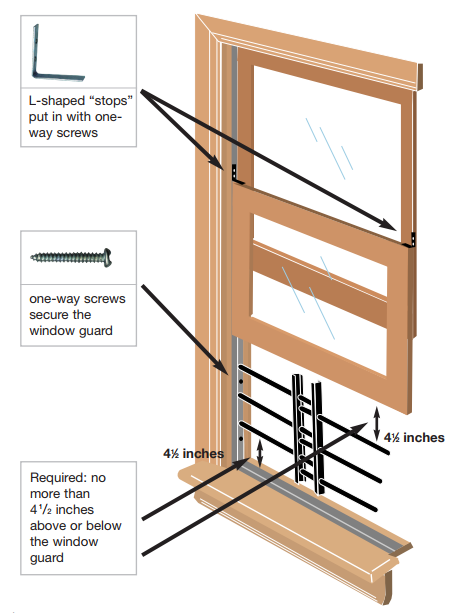 The "Window Guards: They Save Lives. They're the Law." pamphlet from New York City shows that both stops and a guard are required in all windows in all apartments, except for one window opening onto a fire escape.

New legislation proposes that landlords should be responsible for installing and maintaining child safety equipment that costs $20 to $60 per window.

We probably don’t think about it, but our renters are at risk of falling. Window screens are designed to keep bugs out, but children all too often press against the screens, which pop out and send the child falling toward the ground. If you have children living in your apartments, you need to know about window safety, and about the legislation being proposed to cost landlords hundreds of dollars per unit.

Falling has been in the news lately. Six Massachusetts children fell out of apartment windows this summer (Quincy, Brookline, Framingham, Chelsea, Medford, and Lynn). Miraculously, children are bouncier than adults, and according to the Journal of Pediatric Surgery, 50% mortality arises only above five stories. One of these Massachusetts children died tragically. The others were either injured or unharmed.

In 2011, the Consumer Product Safety Commission estimated that each year, 3,300 children fall from windows badly enough to require hospitalization. If Massachusetts experienced its proportional share of falls (by state), then 60 falls went unreported in the media this summer, or else the CPSC estimate does not apply to Massachusetts. (Updated statistics would be helpful.)

Every child’s death is a tragedy, and many who aren’t killed are permanently injured. No one can therefore blame Senator Mark Montigny, of New Bedford, for proposing S 1334, which would copy-paste the New York window guard ordinance into Massachusetts General Law.

In New York, landlords are required to notify tenants annually of their right to window guards, to install them anywhere a child under age 10 is residing, and to maintain them.

We found window guards priced variably between $20 and $60 per window before installation. A typical three-decker has more than ten windows, and knowing tenants, these guards will have to be replaced regularly. This large expense should therefore be expected to be passed through to tenants in the form of higher rents.

Requiring window guards is analogous to asking Ford to provide car seats. Car seats and their proper installation are an excellent idea, but for some reason, we don’t expect Ford to foot the bill. (Perhaps the auto industry has a better lobby.)

“Window guard” in New York means a metal grating. New York also requires “window stops” which prevent a lower sash from being opened beyond the guard. For double-hung windows, the “stops” could be set even lower, so as to make the expensive guard unnecessary. This would be every way superior to window guards. A window stop would cost $5 installed (compared to $20 to $60 before installation for a guard). If set low enough, stops would be equally effective. The top sash would still open fully for ventilation, while the bottom sash would remain mostly closed. One can imagine requiring window manufacturers to install these lower sash stops by default. (If you know Senator Montigny, share this good idea with him.)

Until or unless the law is changed, the National Safety Council gives good tips, which we have reworded as a communication you should share with tenants who have children:

Window safety is an excellent idea. Just, let’s make sure we apply it where needed, not everywhere, and keep rents low for everyone.

Thanks to Lou Marino of Chelmsford and Ray Smalley of Holyoke for alerting us to this legislation.