According to USA Today, the Columbia Gas explosions were caused by failure to transfer old sensors to a new gas main. Meanwhile, the gas company, Real Estate Bar Association, and MA Attorney General were all giving opinions about the legality of thousands of apartments still without heat.

Cause of the Explosions

On Thursday, September 13, 2018, an old cast iron main was being replaced with a new plastic main. The new main was activated and pressurized, but the sensors were not moved from the old main to the new main.

As the old main was depressurized, the automatic regulator recorded falling pressure. Thinking more gas was needed, the regulator sent full pressure into the new main. The new main overpressurized eighty homes, which almost simultaneously exploded. The explosions injured dozens and killed 18-year-old Leonel Rondon, who was in his car celebrating with friends just hours after being awarded his driver's license.

As a precaution, 8,600 residents were subsequently evacuated. As of November 17, 64% of residential meters were back online and safe to use.

According to Patch, non-lawyer adjusters working for Columbia Gas started advising renters to withhold rent. Not only was this unfair, it was a clear case of unauthorized practice of law.

According to MGL Chapter 221 Section 46, “No corporation or association shall… give legal advice in matters not relating to its lawful business.”

The Attorney General reviewed this matter, and whether from oversight or ideology, ignored the issue of unauthorized practice. The Attorney General sided with Columbia Gas.
Under the State Sanitary Code, she reasoned, landlords are required to provide heating equipment capable of maintaining the premises at 68 F (64 F at night). If a landlord has not done so, the landlord has breached their warranty of habitability, and renters may withhold rent, she said. “State law allows you to withhold rent if you are without heat or hot water,” her website says.

MGL Chapter 239 Section 8A is the law the Attorney General had in mind. The law recognizes that some renters may inadvertently rent from slumlords. If a renter cannot get a landlord’s attention to make repairs, and if the renter can prove the landlord is knowingly negligent in maintaining the premises, the renter can raise the condition of the premises as a defense against eviction for non-payment.

The Attorney General’s website plainly acknowledges this fact. “Even if you win the case, a record of the case will remain in the public docket system.”

So-called “rent withholding” ought to be a matter of extreme last resort. Even if a renter makes convincing explanations to future landlords, having an eviction record of any kind is an additional housing barrier no renter needs.

What the Attorney General is Trying to Do

The Attorney General is trying to make Columbia Gas pay for 100% of the rent owed from September 13 to the time gas is restored. “Landlords are not expected to take a financial loss due to this disaster,” the Attorney General’s website said.

As reported by the Eagle Tribune, one renter applied for reimbursement from Columbia Gas and was denied. She paid her landlord, but only landlords are allowed to be reimbursed. Columbia Gas has made at least $56 million in reimbursement payments to business owners and homeowners, but they are not reimbursing renters. The reason for this is unclear.

What is Happening in the Real World

To prevent scams, landlords are being required to document their rental agreements and a history of payment from each affected renter. Presumably rentals that were behind just prior to the explosions, or with verbal agreements, will be denied for reimbursement. No reimbursements are expected for time periods after gas is turned on mid-month. So Landlords have to calculate remaining rent owed and chase tenants retroactively.

Given that the fastest possible eviction in Massachusetts is 90 days, considering all notice and waiting periods, best practice for landlords would be to file eviction at the first moment rent is unpaid. This is particularly true where a landlord can’t prove why the renter has not paid. Maybe they are expecting a gas reimbursement, in which case probably all will be well. Or maybe they can’t afford to pay the rent anymore because they have lost their job, or suffered another concomitant calamity.

The Attorney General has stated that this will be considered a violation of Chapter 93A. Landlords can take no action for non-payment until gas is restored. If they do issue a notice to cover their bases, they will be exposed to consumer protection counterclaims.
In practice, most landlords will be kind and prefer not to serve an eviction notice. Sadly, given the base frequency of evictions, it is likely that at least some renters affected by the gas explosion are now also suffering economic hardship. They will not be able to pay full rent once gas service is restored. At the moment gas is restored, landlords should issue non-payment notices for the renter’s portion post-restoration. Most will pay. For those who do not, the eviction delay will be minimized.

Attorneys at the Real Estate Bar Association internally discussed avoiding all of the rent withholding mess by terminating tenancies under the “Act of God” clause. A well drafted lease will terminate when the building is rendered uninhabitable due to circumstances beyond the landlords’ control. The Attorney General ruling establishes that these units are uninhabitable. The Columbia Gas explosions were beyond any landlord’s control.
The AG has not issued any guidance contrary to “Act of God” termination. The AG’s guidance concerns non-payment only. Considering the AG’s guidance that landlords are not expected to take losses, the best advice seems to be “sit tight” and apply for reimbursement from Columbia Gas.

In summary, the Attorney General’s actions are overall acceptable.

On the down-side, she has popularized a misconception of the rent withholding statute, has compelled landlords to float the delayed rent, and has expanded the consumer protection statute to expose uneducated landlords to counterclaims if they take legal action to initiate non-payment proceedings early. 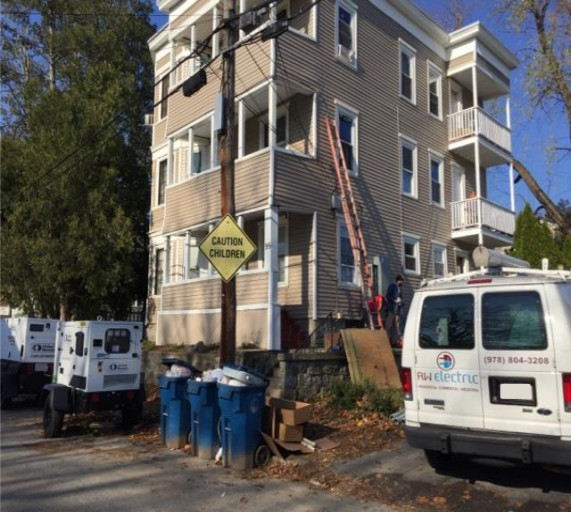 This image from the City of Lawrence daily briefing of November 14 hints at the complexity of temporary and permanent heat restoration. Lawrence arranged for 16,195 replacement Thanksgiving dinners. Work crews from multiple states were expected at time of writing to keep working through nights, weekends, and federal holidays.

But on the up-side, she has said that landlords are not expected to lose money, and in her consumer protection guidance, she has attempted to prevent any renters from entering the permanent eviction record. Time will tell how well this policy has worked.

If you are a landlord and you have applied for reimbursement from Columbia Gas and been denied, or if your renters have withheld rent, tell us your story. Email us at hello@masslandlords.net or arrange a time to call.