The question of whether a landlord can prohibit satellite dishes has come up several times in the last year: in private correspondence, at two events, and in last month’s review of LegalZoom. 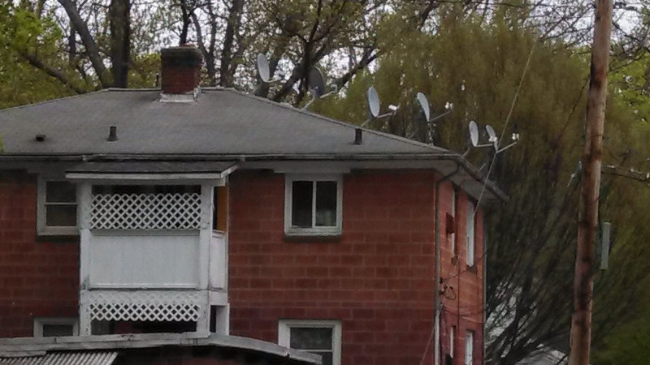 On July 6, 2017, MassLandlords received a pleasant but unsolicited communication from Steve Hill, President of the Satellite Broadcast and Communications Association (SBCA). Steve said, “We have a number of valuable resources available to help your organization understand the federal regulations and avoid disputes.”

In his email signature, Steve linked us to a page at the SBCA website. It read, “The Federal Communications Commission (FCC) … allows … renters the right to install satellite dishes on their homes and places of residence.”

We researched the issue and found the SBCA guidance to be so imprecise as to be incorrect.

What Do FCC Regulations Say about Landlords and Satellite Dishes?

“Any restriction, including … any … lease provision, … on property within the exclusive use or control of the antenna user … is prohibited.”

Why Rental Agreements Should Deny All Satellite Dishes without Permission

The MassLandlords lease says that the addition of a satellite dish is a prohibited activity without the written permission of the landlord. Although the satellite industry doesn’t like it, this is a good idea and it ought to comply with FCC regulation (note: no ruling has been issued, but the FCC’s own site implies this is okay).

If a tenant wants to install a dish in an area they exclusively control (their own porch in a multi, their own roof in a single), a landlord can use the MassLandlords lease and comply with the regulation by answering such requests with a prompt “yes.”

Landlords of multifamilies should withhold permission if the tenant requests a dish over siding or on a roof. These are shared common areas and are not covered by the FCC regulation.

Isn’t it desirable to permit satellite dishes as another amenity? Yes, of course. But the reason for denying a third-party dish is clear to any industry veteran. However much the satellite dish technician claims that they are sealing the holes during installation, those holes will be with you long after the technician has moved onto other work and your tenant has moved into another apartment elsewhere. Those holes will need to be replaced with structural material again, and to our knowledge, no MassLandlords member has been reimbursed by a dish company (but many have asked).

Landlords can upcharge for a satellite dish only in the form of higher rent. This means if you want to make money to cover the cost of dish removal and repair, you need to agree to it prior to lease signing or you need to sign a new rental agreement mid-tenancy, in either case, at higher rent.

Remember that the health and safety of all residents depends on a weathertight barrier around the whole house, and that if you permit a dish to break this barrier, and mold develops, you will be responsible.

Note that landlord-installed solar panels are not the same as satellite dishes. Solar panels come with a revenue stream to offset future removal and repair costs.

The best option, therefore, is to have a dish professionally installed where it can do no harm, on your own terms, and to offer this as an amenity to attract tenants at higher rents. They won’t install their own dishes and you can monetize the holes.

FCC Exceptions to the Ban on Bans

First, landlords can withhold permission if the dish would fail to preserve a historic building eligible to be listed on (or actually listed on) the National Register of Historic Places.

Second, landlords can withhold permission even inside a tenant’s exclusive domain if the dish would create a clearly defined, legitimate safety hazard, and that hazard was identified in writing along with the restriction. For instance, roof leaks leading to mold.

A Landlord Can Prohibit Satellite Dishes Most of the Time

In conclusion, it is our reading of the satellite dish regulations that landlords may reasonably withhold permission for dishes on siding and roofs, on historic buildings, and for safety reasons that are disclosed in writing. So yes, a MA landlord has several options to prohibit satellite dishes.

2 Responses to Can a Landlord Prohibit Satellite Dishes?