Blog » Burst Pipes: How to Avoid and How to Fix

Water freezes at 32 degrees Fahrenheit, so if your pipes hit that temperature, they might become burst pipes. Whether they do depends on one factor: pressure. 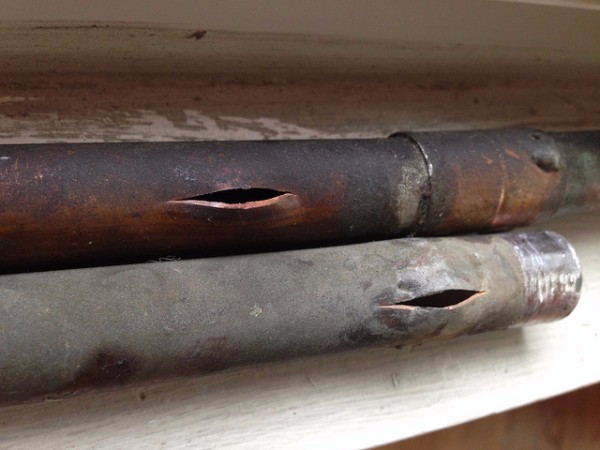 It's common knowledge that letting a faucet flow prevents burst pipes. But is that because flowing water can't freeze? Nope. Flowing water can freeze in its tracks. Think about any stream or creek in the area, or the ocean.

So what does opening the faucet do? When the water freezes, it expands. We all know ice is less dense than water, right? That's why ice cubes float. What an open faucet does is allow the water to freeze and expand without increasing pipe pressure. Any would-be pressure increase is brought back down to normal as water flows harmlessly out of the faucet. Without this release, the pipes can easily burst.

Frozen pipes tend to occur when the outside temperature drops into the twenties or teens for several days, especially if these pipes are uninsulated. You can put pipe wrap around them to keep them warmer at lower exterior temperatures. You can also close windows or drafts that blow over pipes. Just make sure your gas and oil mechanicals have enough airflow to operate.

After you've done those things, if you're still worried, let water drip out slowly from a faucet or two. This won't stop the pipes from freezing, but it will stop them from bursting. Make sure each pipe has a dripping faucet to release pressure.

You know you have a frozen pipe when the tenant calls in the morning and says nothing's coming out of the faucet. You could also have a burst pipe.

First, here's what not to do: A landlord we know went into the basement with a space heater. He plugged it into an extension cord that was lying on the floor, wrapped the loose cord around his shoulders, and held the heater above his head aimed at the frozen pipes. When the pipes started to thaw, he realized they were burst. The pipes started to spray water all over him, his extension cord scarf, and the exposed space heater filaments. It's a wonder he didn't erupt in a ball of blue lightning! Don't do that.

When you discover there's no water coming out of the faucet, leave the faucet open. This will give some pressure release when you start thawing the pipes. Then go inspect the pipes for signs of bursting. You can grip them here and there to see if they feel uneven. They will be burst but full of ice and therefore not leaking.

If they are burst, shut off the water main next. Only then should you apply heat using a waterproof heating pad to an area near but not on top of the burst. If you only have a hairdryer or a space heater, make sure your electrical current is not flowing near where the burst is, and that you're standing out of any possible puddle.

If you've followed all these steps, when the pipes thaw, they will squirt, drain, and quickly lose pressure. You can then cut and replace the burst pipe and restore service to the unit.