Boston is banning short-term residential rentals by some (but not all) property owners. By way of a measure titled – ironically, some might say – “an ordinance allowing short-term residential rentals” the city council and mayor are hoping to stamp out one particular form of otherwise lawful economic activity, namely purchasing apartments in order to rent them out via online platforms such as Airbnb. In this Boston follows Cambridge, which enacted Massachusetts’ first such ban last year. 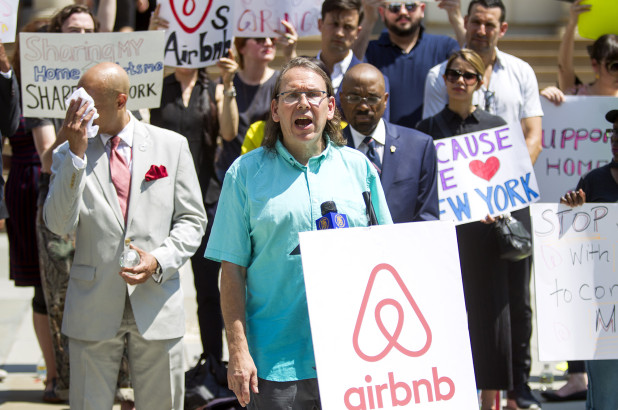 Skip Karol protested in favor of Airbnb and was subsequently fined $32,000. The City of New York said he was operating an illegal basement rental. Erik Thomas/NY Post

City officials make no bones about the goal of the new ordinance and its rationale. According to Councilor Michael F. Flaherty, chair of the Committee on Government Operations, and Sheila Dillon, the Chief of Housing and Director of Neighborhood Development, “eliminating investor units will improve the vacancy rate.” More units will become available, the City claims, if the short-term rental business is confined to certain people.

When the ordinance takes effect next year, property owners will only be allowed to offer their units for short-term rentals (which the ordinance defines as occupancy for fewer than 28 consecutive days) if the owners reside in the unit “for at least nine months out of a twelve-month period.” Non-resident owners, i.e. those who do not live in their units nine months of the year, are prohibited from using their property in this particular way.

Readers may well be wondering whether this is legal or whether it amounts to an uncompensated taking contrary to the Fifth Amendment. An outright ban on short-term rentals would fall into the category of “regulatory taking,” as Professor Jamila Jefferson-Jones of the University of Missouri-Kansas City School of Law points out, referring to a legal concept that dates back to the 1922 Supreme Court case Pennsylvania Coal v. Mahon when Justice Oliver Wendell Holmes, Jr., stated that “if regulation goes too far, it will be recognized as a taking.”

But an outright ban on Airbnb is not what Boston has enacted, of course: Resident owners remain free to engage in short-term rentals, so long as they comply with the rest of the ordinance. But does singling out non-resident owners go too far and amount to a regulatory taking? The short (and predictable) answer is “maybe.”

One of the factors that courts look to is the extent to which the regulation has interfered with “investment-backed expectations.” At first blush, this standard would seem to favor exactly the class of property-owners Boston is seeking to penalize. However, the courts have made clear that a government action does not qualify as a regulatory taking simply because it prevents the owner from “exploiting the investment potential to the fullest.” Although the regulatory-taking argument has a fine point, it may not fly true enough to hit the mark. But it is not the only arrow in the quiver.

Let’s hear it for New York

Even if the Boston ordinance proves immune to a regulatory-taking claim, aggrieved parties may have other options. For example, in the wake of New York City’s efforts to stymie short-term rentals, one Airbnb host, Stanley Karol, filed a complaint in federal court. After publicly opposing legislation targeting Airbnb, Karol found himself the subject of a vigorous campaign on the part of the city’s Office of Special Enforcement (OSE).

Karol’s lawsuit, funded by Airbnb, does not challenge the constitutionality of the underlying local ordinance. Rather, Karol’s complaint alleges that the city’s enforcement efforts (which include a $32,000.00 fine) violate his rights to free speech and due process. He says the root of OSE’s anti-Airbnb animus is the significant funding that Mayor Bill de Blasio and other local politicians receive from hotel owners and the union that represents hotel workers, namely the New York Hotel and Motel Trades Council.

Incidentally, the union that represents hotel workers in Boston is Unite Here, Boston’s Local 26. Legally-mandated reports of the organization’s independent campaign expenditures and its campaign contributions to Boston mayoral and city-council candidates are available online at the Office of Campaign and Political Finance (OCPF).

Since 2013, for example, the Unite Here TIP State and Local Fund had made independent expenditures and contributions in support of Mayor Marty Walsh and Boston City Councilors in excess of $96,030.  Other major independent expenditures in support of Walsh came from a group called Working America, an affiliate of the AFL-CIO. With the anti-Airbnb ordinance, the unions are seeing a solid return on investment.

Boston’s mayor and council have chosen to discriminate in favor of one class of property owners (those who live in their units for nine months of the year) and against another class (those who live elsewhere).

When government categorizes people and treats one category worse than another, it risks violating our right to the equal protection of the laws. Some forms of categorization are inherently suspect, e.g. race and sex. Others are not, e.g. economic class.

Even though economic classifications are not inherently suspect, might the Boston ordinance prove vulnerable to a legal challenge on equal-protection grounds? The hurdle for plaintiffs is a high one. The onus would be on the aggrieved property-owner to show that the city’s classification is irrational and wholly arbitrary, a “gross abuse of power, invidious discrimination, or fundamentally unfair procedures” in the words of the First Circuit Court of Appeal. In contrast, the city would only need to show that its ordinance is rationally related to a legitimate government interest, which is the lowest level of scrutiny that the courts apply to government actions.

This may seem like an easy showing to make. But is it? Putting the question another way, it really boils down to this: Does the government have a legitimate interest in extirpating one particular form of real-estate investment? If not, the ordinance should not stand.

If any property-owners are interested in exploring the possibility of a legal challenge to the new ordinance, please let us know. Leave a voicemail at 774-314-1896, Email hello@masslandlords.net or find us on Twitter @MassLandlords. 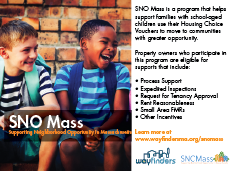 Become a member today!
Owners, managers, and service providers sustain our nonprofit trade association with membership dues. Open to all.
JOIN
Sign In