Across the U.S. by Bike – A Slow Motion View of Housing in America - MassLandlords.net

Blog » Across the U.S. by Bike – A Slow Motion View of Housing in America

The view from the Santa Ana River Bike Trail coming into Riverside, Calif., is like a snapshot of housing in America.

On the south side of the trail, suburban neighborhoods with large, well-tended two-story homes spread across the landscape below the trail, bordered and protected by a tall brick wall closely abutting their backyards. An uncharacteristically verdant golf course – despite the dearth of water in the nearby Santa Ana River – interrupts the residential streets. 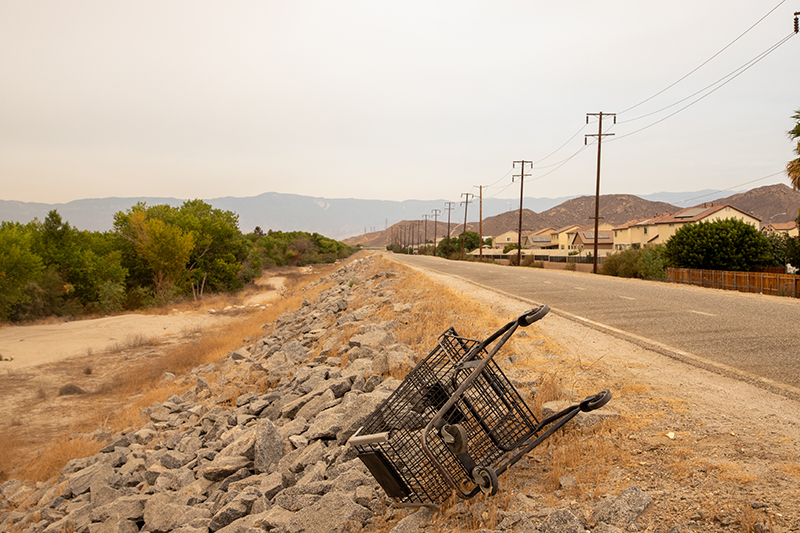 This section of the Santa Ana River Bike Trail in Riverside was crowded with homeless encampments in mid-summer. While the encampments have since been cleared out (this photo was taken on September 23, 2021), remnants of life beside the trail remain. (Image by Brian Benton. CC BY-SA MassLandlords, Inc.)

About 200 feet away, on the trail’s north side, along the steep dry banks of the Santa Ana River leading up to the elevated bike trail, are an extensive series of make-do enclaves. These tarped shelters have become long-term stand-in homes for those without property or means to rent. People living in these enclaves would be referred to as “homeless,” but these loose structures are serving, increasingly long-term, as their homes.

This was a theme that played on a loop as I rode my bike across the United States in May and June 2021: a stark juxtaposition of the comfortably housed nearby those with inadequate or nonexistent housing. It was a constant reminder that housing in America is on an unsustainable trajectory. 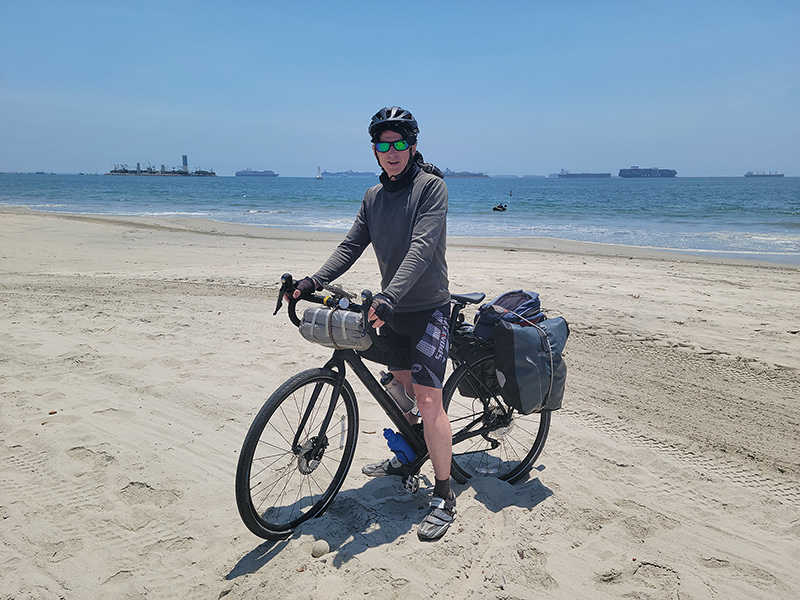 The author with his bike on Long Beach, Calif., on the final day of his cross-U.S. bike trip. Image: cc sa-by MassLandlords.

Where Have All the Mid-sized Homes Gone?

I rolled out from my home in Easthampton, Mass., on May 1, 2021, and arrived in Long Beach, Calif., 68 days later, on July 7. The ride yielded countless fresh perspectives, including a slow-motion view of housing.

The purpose of my cross-U.S. bike tour wasn’t to gather observed data on housing. Its purpose was simply adventure. Yet, even from my anecdotal observational perch as I pedaled through a spectrum of American regions, states and neighborhoods, it was impossible not to notice the growth and proliferation of single-family zoning and the increasing disparity between the amply housed and the unhoused that it is causing.

Cycling 3,500+ miles, east-west across a mid-Southern route, I dodged traffic through the Northeast cities and roads along the I-95 corridor, climbed up and coasted down hills of Appalachia, fought wind across Midwestern farm fields, battled boredom in the interminably flat plains of western Texas and New Mexico, struggled with the heat in the low desert of central and western Arizona, and pushed through the riverside cities crowding toward the California coast. For some reason, I loved every day of the ride.

But through every region, even as the landscape and topography of this beautifully diverse country morphed, the housing picture repeated itself: large houses on expansive, grassy lots juxtaposed with crammed trailers (so many trailers!), rundown row houses and impromptu homeless enclaves. I expected to see more mid-sized houses on modest, quarter-acre lots, like the Iowa ranch house in which I grew up. 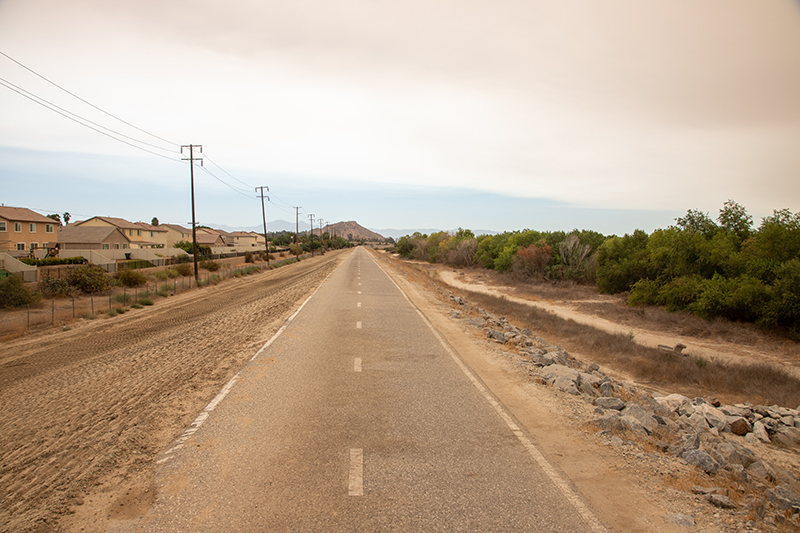 Traveling west on the Riverside Bike Trail offers a view of large suburban homes on the south side of the trail. On the north side: the overgrown dry riverbed, where homeless encampments dotted the landscape during the summer. (Image by Brian Benton. CC BY—SA MassLandlords, Inc.)

The arresting housing scene in Riverside isn’t discernible by car. The freeways are safely distanced from this imagery. Only by biking, walking, running or skating along the river trail can one witness the disparate housing situation.

Riverside, Calif., is a mid-sized, middle-income city south of the San Bernardino hills, about one hour east of Los Angeles by car. The Santa Ana River Trail runs some 50 miles, from east of Riverside all the way to the Los Angeles beaches. Youtube videos shot in 2018, capturing countless homeless settlements from the trail in Los Angeles, went viral. Unlike the Los Angeles enclaves (which have since been largely “cleaned out”), the Riverside encampments are noticeable for their proximity to affluent neighborhoods right on the other side of the raised trail. The Riverside homeless dwellings rest on the sandy, inclined southern bank of the dried up, sun-drenched riverbed.

For miles, as I rode along the Riverside trail, sweeping my view back and forth between the abundantly housed and those without adequate shelter, I wondered, how did this come to be, this explosion of large homes and lots amid a national housing crisis?

In the short-term, the COVID pandemic and national economic slump likely account for some of the growth in the homeless population. But it’s a longer-term problem, and the housing crisis, and homeless explosion in California and nationwide, precede the pandemic by more than a decade. In the bigger picture, the most prominent culprit in the widening housing disparity in the U.S. is single-family zoning, an exclusionary system that originated in the 1920s and ’30s as a racist circumvention of the law to keep non-white and low-income people from moving into affluent white neighborhoods.

Biking or Driving – Effects of Runaway Single-Family Zoning are Apparent

Single-family zoning has become pervasive across U.S. cities small, medium and major, and has taken on features like large lot size requirements, setback minimums and parking space mandates. In many U.S. cities, single-family zoning is the law in 75% or more of buildable land.  The zoning structure has pushed property prices ever higher, crowding out land for new housing, raising average home values beyond the reach of larger populations and making it more difficult to build multi-family housing in high-opportunity neighborhoods.

Meanwhile, single-family zoning has contributed to environmental deterioration by increasing urban and suburban sprawl and reliance on cars, while restricting national housing supply and affordability.

Before biking across America, I’d driven across the country several times since the 1980s. Driving doesn’t afford the slow-motion, up-close view or the access to wending, house-lined suburban streets that cycling does. Still, the difference between this cross-country bike ride and previous drives was pronounced. It evidenced the corrosive results of runaway single-family zoning: much more car traffic than ever before; a clearly increased divide between large, 2,500+-square-foot homes on one hand, and trailers, concentrated row houses and homeless dwellings on the other; almost no mixed-use neighborhoods and more separation between the affluent and medium- and low-income populations; and far fewer neighborhoods with mid-sized homes and lots – the “missing middle.”

I imagine making my way across the U.S. in another 10 years if we continue on our current path. Tent cities and homeless communities will become larger and more permanent, challenging utility, water and food supplies. Suburbs will continue to expand out, requiring more car travel, further clogging roadways and tainting the air. Home sizes and lots will have extended their expansion, swallowing up more buildable land and shrinking the available space for affordable houses and multi-families.

It’s possible we are beginning to wake up nationally to the unfairness and unsustainability of our zoning structure. I didn’t ride through them, but the city of Minneapolis and the state of Oregon have both taken legislative steps to weaken single-family mandates and encourage denser, mixed-use development. I did ride through California, Maryland and Virginia, all of which are considering legislation to allow denser housing such as duplexes and multi-families.

In Massachusetts, we have a long way to go to address land-use inequality. But our state has at least taken the very small initial step of lowering the voting threshold for municipalities to change zoning ordinances and easing the path for building accessory dwelling units (ADUs). While these steps won’t make an immediate difference, they may help address the state’s affordable housing crisis in the long run.

And while average home square footage has doubled since the 1960s, average lot sizes have begun to shrink slightly (though that has more to do with market forces than with zoning ethics).

Some of these are encouraging signs, but there is still a long road to travel toward improving housing access in the U.S.

Single-Family Housing as One of Many Options

My cross-U.S. bike ride was an epic tour, a grand adventure and a revelatory journey. It was also a non-stop eye-opener that underscored the broadening housing inequity resulting from our antiquated system of exclusionary zoning.

To be clear, I have nothing against single-family properties as a housing choice. I have owned single-family homes (I currently live in a home with an attached ADU). But this trip reinforced my solidarity with MassLandlords’ stance of eradicating the requirement to use land solely for single-family purposes. Nobody is advocating taking away people’s right to live in single-family properties. The removal of single-family zoning, such as in Oregon, does not infringe on people’s rights to choose that lifestyle. What it would do is allow for mixed neighborhoods, where those who opt to could build duplexes, triplexes, fourplexes and ADUs that would expand the affordable housing market while providing more housing in higher opportunity areas.

Ideally, our state will follow up some of the incremental zoning law changes enacted through the recent Housing Choice Law (Chapter 358 of the Acts of 2020) with further reforms to dilute single-family zoning and regulations and promote mixed use and multi-family options.

At some point, perhaps five or ten years down the road, I might consider another cross-country ride (though I would cycle west to east next time to take advantage of prevailing winds!). It would be my hope that I might witness a different housing scenario: more neighborhoods with small and mid-sized homes and lots, less juxtaposed inequity of abundance and poverty, and, in urban areas, an increase in diverse housing types in mixed-use blocks.

Riverside and California have a monumental challenge ahead to get a handle on the housing and homeless issues there. Encouraging signs are percolating in the form of municipal legislation to allow fourplexes in Sacramento and Berkeley, for example, with other cities now following suit, and, slowly, more states joining the trend.

Ten years hence, as I imagine riding along the Santa Ana River Trail through Riverside, I would ideally see ADUs, duplexes and other multi-families sprouting through those suburban neighborhoods to the south. And to the north? No longer a need for the rows of ramshackle make-do dwellings lining the river’s dry banks.

Annual Elections 2021
Members: Nominate someone for Board of Directors or Good Neighbor.
NOMINATE
Log In