This graph needs to be updated manually, but here is where we stood recently: 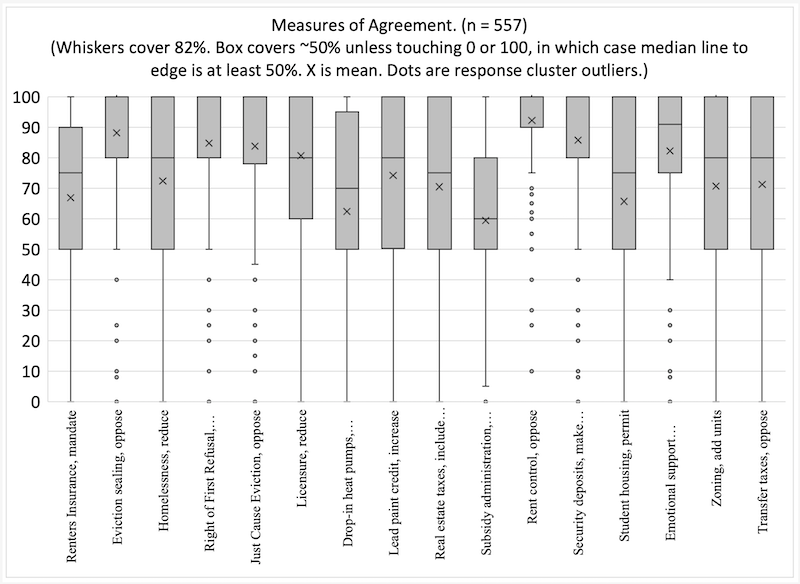 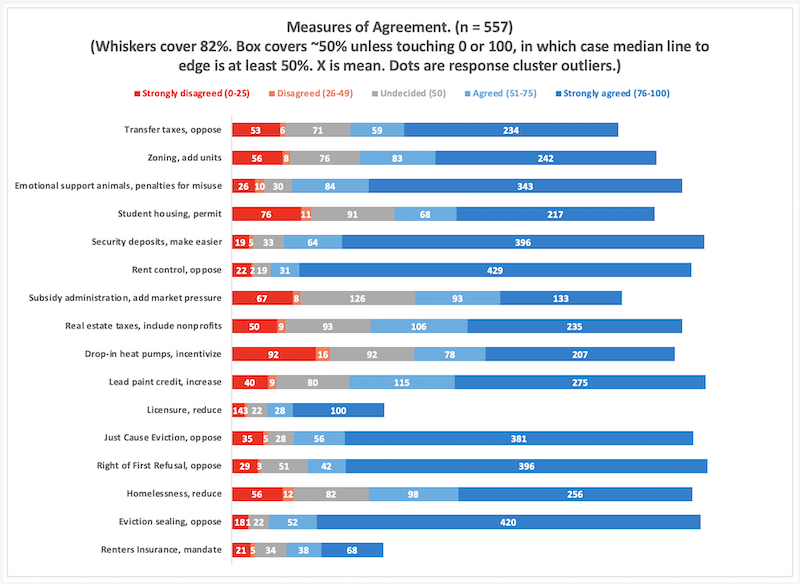 Members in good standing can take the survey here:

The MassLandlords policy priorities survey ensures that every member has a voice in deciding the association’s public actions, stances and strategies for improving the statewide landlording business environment.

Our policy priorities survey is an online evergreen poll that seeks MassLandlords members’ opinions on a range of housing issues and public policies that can have positive impact on rental housing in Massachusetts.

The policy priorities survey is a main component in MassLandlords’ commitment to a democratic system of governance. We need members’ input, and we rely on the survey results, as displayed above, to formulate decisions on how best to improve Massachusetts housing policy for landlords and renters alike. Members’ opinions are what we use to decide which legislation to endorse or oppose, what pending proposals to support, what litigation to weigh in on, and even what issues to prioritize.

In short, the policy priorities survey is how we can best represent you and the issues that pertain to your business. 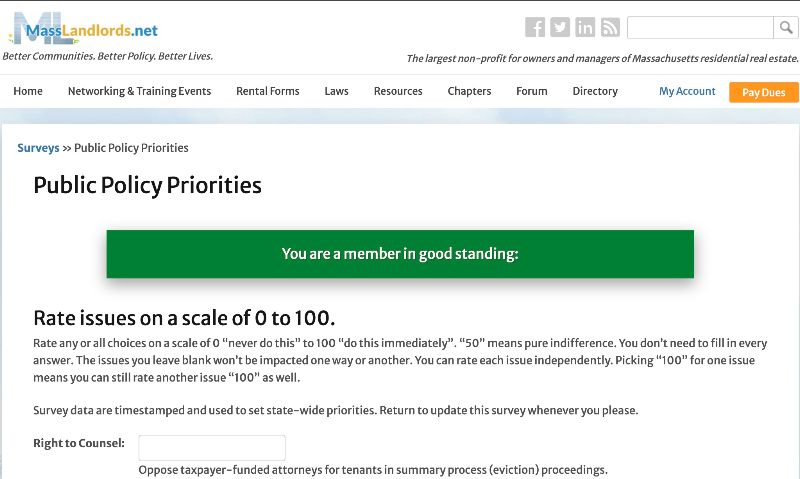 The policy priorities survey is easy to use. Simply enter a number between 0 and 100 in the blank next to an issue—0 means “never do this”, 100 means “do this immediately.” Image: CC BY-SA MassLandlords

Policy priorities survey available to members at any time

Seasoned MassLandlords members might be familiar with our policy priorities survey. Periodically, when certain legislation is introduced or new laws are enacted, we ask members to weigh in with their thoughts. We encourage all members to add your voice to the survey and help us direct our public actions through member consensus.

But you don’t have to wait for our prompt. At any time, you can click on the survey and enter your opinions on how we as an association should move forward.

All members in good standing are eligible to take the survey, and we have refined it to make participation as simple as possible. On the page you will see a list of issues, each given brief labels such as “zoning,” “rent control” or “rent cancellation,” followed by a sentence defining the proposed action on which you are voting.

You may return to the survey and change or update your votes at any time.

We use a score voting (also known as “range voting”) system to tally results. This means that policy decisions are made based on where the average of all votes lands within the range of options. If a majority of voters favor a policy, such as opposing rent control, by entering scores above the average, that will become the MassLandlords policy position.

Score voting is ideal for compiling results in multi-issue surveys, because: 1) It provides thorough vote representation by allowing us, and readers, to see and record all votes cast, and placing them visibly on a results graph. Votes that fall in popularly common trends are blocked together; but in the score voting system, even the most outlying votes are represented on results graphs. And: 2) Score voting results can then be categorized in trend clusters that show the strength of voting blocks, and how scores for one option compare side-by-side with others. This helps inform our policy decisions, especially if two voting options are very close.

Ranked choice voting (RCV), by contrast, is an electoral system we believe to be fairer and more effective for legislative elections, but that would not work as well for our multi-issue surveys. RCV has participants rank several options as first choice, second choice, third choice, etc. The election winner is decided by which candidate receives the majority (more than 50%) of first-place votes. If no candidate wins a majority of first-place votes, RCV moves to a new count, eliminating the candidate with the fewest votes and awarding that candidate’s votes to those voters’ second choice. The process continues until a candidate has at least 50% of first-place votes and is declared the winner.

Our score voting survey asks you to enter your opinion, in the box next to the survey item, in the form of a number between 0 and 100. The number you enter designates how strongly you feel about the proposed action – 0 meaning “never do this,” 100 meaning “do this immediately,” or any number between those poles. A score of 50 means indifference on the voter’s part. 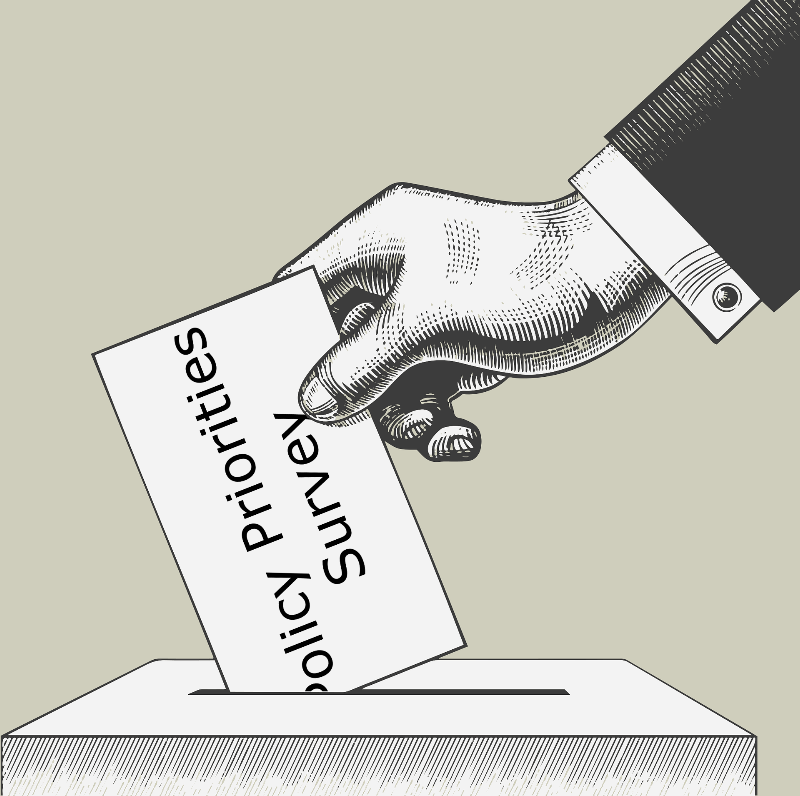 Soliciting votes from MassLandlords members on a range of rental housing issues is a main component in our commitment to democratic governance. Image: CC BY-SA Pixabay

The first graph displays bars (or candlesticks) with extending whiskers (or wicks) representing votes cast on each issue. Each bar contains a line showing the median among all votes. An X marks the mean. The first graph sometimes shows dots throughout the voting range. The dots represent votes (called outliers) that don’t fall within the range of popular voting blocks.

This page is updated with new results when we introduce a new issue to the survey. All past policy priorities survey questions are saved and archived to allow for long-term tracking of issue trends.

When a survey yields clear consensus, such as a recent poll on eviction moratorium reimbursement and opposing rent cancellation, MassLandlords endorses and lobbies for proposals and legislation that support these stances.

“MassLandlords has played supporting and opposing roles in various policy areas, especially rent control and right of first refusal,” said Doug Quattrochi, Executive Director. “We have also invested heavily in policy infrastructure, because some of what the members have asked us to do cannot be done without better grassroots organization or even more fundamental electoral reform.”

Also, in further support of democratic governance, the survey includes a field for members to write in your own suggestions for policy proposals. Members are also encouraged to suggest different or clearer wording of any proposal on the survey.

All questions posed in the survey are saved for long-term management. However, occasionally we alter survey questions based on updates to pending legislation or different market conditions. When such changes occur, we delete answers to the original question because they are no longer specifically valid, and update results.

We also delete survey responses that are two years old in order to retain a current and updated reflection of membership priorities and opinions.

The worst form of government, except for all the others

MassLandlords highly values and adheres to our democratic system of governance.

“Many forms of Government have been tried, and will be tried in this world of sin and woe,” begins a famous 1947 quote by the legendary English Prime Minister Winston Churchill, which rings equally true today. “No one pretends that democracy is perfect or all-wise. Indeed it has been said that democracy is the worst form of Government except for all those other forms that have been tried from time to time…”

By empowering MassLandlords members to guide our public actions through your collective voice, we believe we are creating the most stable, inclusive association possible, and presenting a more cohesive and impactful outward message.

Our policy priorities survey, along with our annual elections of directors, are major components in our ongoing democratic effort to achieve that impact.